On November 7, 2020, Chris Nikic earned a spot in The Guinness Book of World Records as the first person with Down syndrome to complete an Ironman Triathlon. The 21-year-old Special Olympian completed the triathlon in 16 hours, 46 minutes, and 9 seconds.

The competition begins with swimming 2.4 miles in the ocean. The second part of this grueling event is a 112-mile bike ride. It concludes with a 26.2-mile marathon. Chris explained to Today that running is his favorite event: “It makes my butt cute and the ladies love it.” Chris trained for 25–40 hours a week for a year, and has more athletic goals he’d like to accomplish. He says inclusion is his motivator. He wrote on Instagram, “All about awareness and inclusion. Awareness for Down Syndrome and Special Olympics. Inclusion for all of us with all of you.” 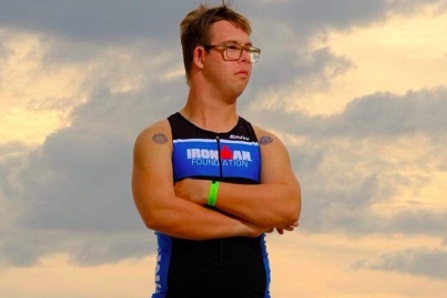 Although Chris may appear superhuman, he admits he struggles with a love of food and his couch. Learning certain tasks also requires more time — for example, it took 6 months for him to learn how to ride a bike. His journey to becoming an Ironman was a unique one, beginning with open heart surgery at 5 months old. He used a walker at the age of 3, and muscle tone remained a challenge for an extended time. At 12 years old, he didn’t have the neck strength to support his head on a ride at Disneyland. At 17, he underwent 4 major ear surgeries. After his ear operations, he was out of shape. To remedy this, Chris set a goal of participating in a triathlon, and created an incremental plan with his coach. (He shares the details in a keynote presentation he gave earlier this year.)

“I don't use my condition as an excuse,” Chris told USA Today. “Instead, I work harder. . . . My dad told me, ‘Don’t ever doubt your dreams, Chris.’ He told me God gave me gifts. I don’t ever doubt my dreams now.” Chris’s key to success is focusing on becoming 1% better every day. The 1% Better Challenge is the name of Chris’s campaign for Down syndrome awareness. He is also utilizing his platform to raise money for Special Olympics and RODS (Racing for Orphans with Down Syndrome). Chris’s accomplishments have brought him media attention from CNN, Insider, Sports Illustrated, and The Nightly News with Lester Holt.